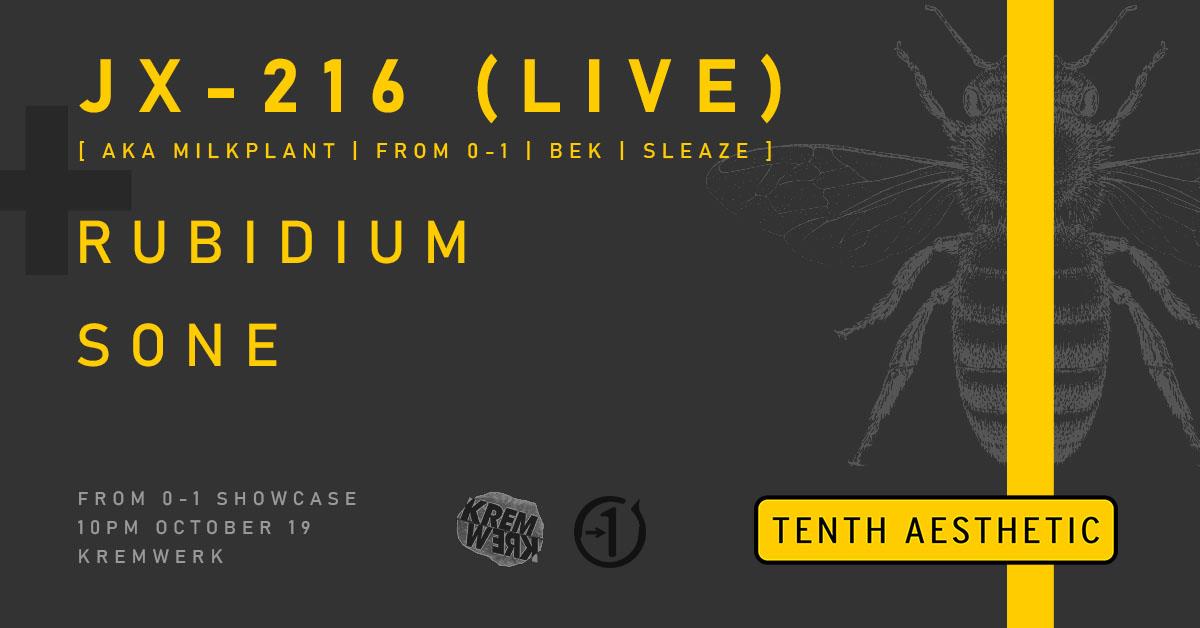 Tenth Aesthetic is back. This time in Kremwerk!

For this special night we bring you a lineup stacked with From 0-1 producers and DJ's. From the San Francisco area we have Jx-216 aka Milkplant and Rubidium, and from right around the corner, Seattle's beloved Sone.

Expect a hazy, dark space with thundering Techno all night long so you are free to lose yourself in the music, and nothing but the music.
Join us early to experience the full scope and building intensity.

About JX-216:
Formerly known as Milkplant, JX-216 is a new alias developed by veteran San Francisco Techno DJ/Producer, Justin William Pennell over the last several years. Schooled in the Midwest and developed on the West Coast, his work encompasses well over 30 years of combined DJ/production experience, and over 10 years of record label management.

In 2008 he began the internationally recognized label, From 0-1 with fellow artist Sone. His newly updated Live PA (which we will enjoy at Tenth Aesthetic) debuted at the 2018 Droid and Blank Code Interface/Scene official Movement Festival event at The Works in Detroit; alongside Kr!z, DJ Hyperactive, Vril, Phase, Sophia Saze, and others. Less than a year into his new alias, he’s already had releases signed to Sleaze Records, BEK Audio, Impact Mechanics, TMM, SUB_tl, and Ascetic Ltd., with more on the way in 2019.

He has played in various cities across the US, most notably in Detroit for Interface/Scene at Movement Festival 2016, and 2018. His mixes have been featured on Tbilisi based Dark Underground, Sleaze podcast, Drone podcast, and Error Sessions. In early 2018 he launched 'Konstruct', a monthly Techno event at Underground SF in San Francisco with fellow artist, Rubidium, showcasing talent from across North America and beyond.

About Rubidium:
Rubidium is a DJ and producer, based in Oakland, California. Resident/promoter at the Konstruct monthly party in San Francisco.
Rubidium’s current take on techno is heavy and dense. Her sound can vary from driving to hypnotic, experimental to atmospheric, with an occasional dip into an ambient realm. She is fond of tension, creative sound design and exploring darker themes in her sets. Rubidium has opened for notable techno artists Cio D'Or, Black Asteroid and Tommy Four Seven. Her tracks can be found on the From 0-1, Webuildmachines, Subspec and Anode labels, with more on the way. Rubidium also serves as art director of From 0-1, pushing pixels and podcasts since the label began in 2008.

About Sone:
Sone is Seattle, Washington based DJ and producer Brian Sonnleitner. His first exploits into live music was being immersed in the underground punk scene in Wisconsin during the mid/late 90's. Fast forward to now, while keeping the same energy and ethos of his early experiences, Brian is a DJ of well over a decade with his sets trending towards the driving and tracky side of techno.

2008 brought Sone into the realm of production with his music exploring a heavier, stripped down sound. His original productions and remixes have received support from Ben Sims, Reggy van Oers, Joachim Spieth, Juho Kusti, TWR72, Soolee, and many others. His tracks appear on his home label, From 0-1, which he runs with long time friend JX-216 aka Milkplant; while surfacing on other labels such as Android Muziq, Webuildmachines, Rheostatus, and Darknet.

=========
The Kremwerk + Timbre Room Complex strives to be a safer space. The following actions or display of behavior will not be tolerated: bigotry, racism, sexism, transphobia, homophobia, misogyny, ableism, as well as the disrespect of the rules of consent. Our staff is here to support you.

Kremwerk is currently not an ADA accessible space. Club entry is through a flight of 12 metal stairs, with two small steps leading into the main part of the club. We have 2 restrooms with a total of 3 stalls and 1 urinal, all gender neutral.

For any questions about safety & accessibility, please email info@kremwerk.com